Full name and nickname
Eric Adams, nicknamed ‘The bowhunter’, because I hunt all the time.

Previous band
Plenty. None of which I’ve cared about. I’ve been in Manowar for 13 years, so it’s hard to remember that far back.

If your house caught fire, what possession would you save first?
A case loaded with everything I’ve collected on the road, like CD’s and neat little presents from fans from right across the world. Kinda like a time capsule.

Favourite person in the world?
My biggest influence, Ian Gillan.

And your least favourite person?
A total asshole called Jeff Pecker who I’ve hated for a long, long time.

Which part of your body would you most like to change?
My skinny legs.

What do you regret about your past?
Absolutely nothing!

What do you wear in bed?
A sheet or a chick!

Most ridiculous thing you’ve done while drunk?
I was in a club, totally gassed, and I poured a pint of beer over my own head for no apparent reason. I was totally drenched!

Worst job you’ve ever had?
As a meat cutter. My prick of a boss wouldn’t give me time off to go to my sister’s wedding. So that was the end of that.

Is there any crime you’d happily commit?
I’ve been f**ked with so many times by the music business that I’d commit murder and not worry about it.

Most peculiar place you’ve had a bonk?
Onstage, when Skyclad were opening for us. I was goin’ off and I could see the audience, but I didn’t give a shit if they could see me!

What do you think when you look in the mirror?
Why couldn’t I have been born rich instead of good-looking?

Where, when and at what age did you lose you virginity?
I was 14 and this chick was babysitting at this house. It was all panned out. She invited me over and boom-ba-boom! It was great!

What is the most stupid thing you’ve done onstage?
Once the whole band mooned at the crowd. They were a great audience, and they got even better when that happened!

Who would you most like to have a fight with?
That prick Jeff Pecker, who shafted me in one of my previous bands. Next time we play New York, I wanna invite him to the gig with his girlfriend, get them backstage, treat them like gold, then beat the living shit out of him.

Describe your ideal date?
Pick her up, go out to dinner and take her home. Lay her on a bearskin rug in front of a big fireplace and f**k her till the moon goes down and the sun comes up.

What was the last joke you heard?
Three guys die and go to heaven. When they get to the gates, Saint Peter says, ‘You guys weren’t supposed to die yet. I’ll give you a second chance. Jump off this cloud and whatever you want will happen’. The first guy, an Irishman, jumps off and wants to swim in a sea of booze. Boom! He’s swimming along, totally gassed. Next, the Jewish guy jumps and says, ‘I wanna be the richest man in the world!’ Boom! He’s loaded. Finally, the Polish guy runs up, trips and just before he goes over the edge, shouts, ‘Cocksucker!’ .

Worst record you’ve ever heard?
My first, when I was in a band at 12 years old.

Best thing about being in Manowar?
It’s the life that I always dreamt of.

Last thing you do before you go onstage?
Lift weights.

Best dream you’ve ever had?
The wet ones. You never forget those.

And the nightmare?
Being on a bungee chord that’s too long… Smash!

Who would you most like to take on a pub crawl?
Paul Clark, our old stage manager. Our parties last for days.

Best chat-up line?
Can your mouth make a perfect circle?

Who would you least like to wake up next to in the morning?
Joey (DeMaio, bass).

What are you views on groupies?
Fantastic! They make the music business what it is.

Worst thing about being in Manowar?
Having no time to yourself. Once the touring starts, you’re constantly on the move.

Biggest fear?
Being high up on a ladder. I don’t mind scaffolding, but when you’re outside and high up in the wind… woah!

What would you most like to ask the head of your record company?
When are you gonna start promoting the f**kin’ band in America?

Why should anybody part with their hard-earned cash to buy one of your records?
They shouldn’t if they’re not into Heavy Metal, ‘cos it’s the only true stuff they’re gonna find.

What would you buy if you had £ 1 million to spend in a day?
A new pair of pants ‘cos I’d have shit in the ones I was wearing! Then I’d buy the best hunting land I could find.

Which member of your band would you take home to meet you mum?
Any of them. I’ve taken them there a few times. We’re the nicest guys in the world!

What question would you ask sex expert, Dr Ruth?
If she’d ever been laid before, with some of the answers she gives. And if she had any young nieces.

Proudest moment of you life?
The first time I played in front of 20.000 people at the Dallas Union, and they knew the words to my songs. 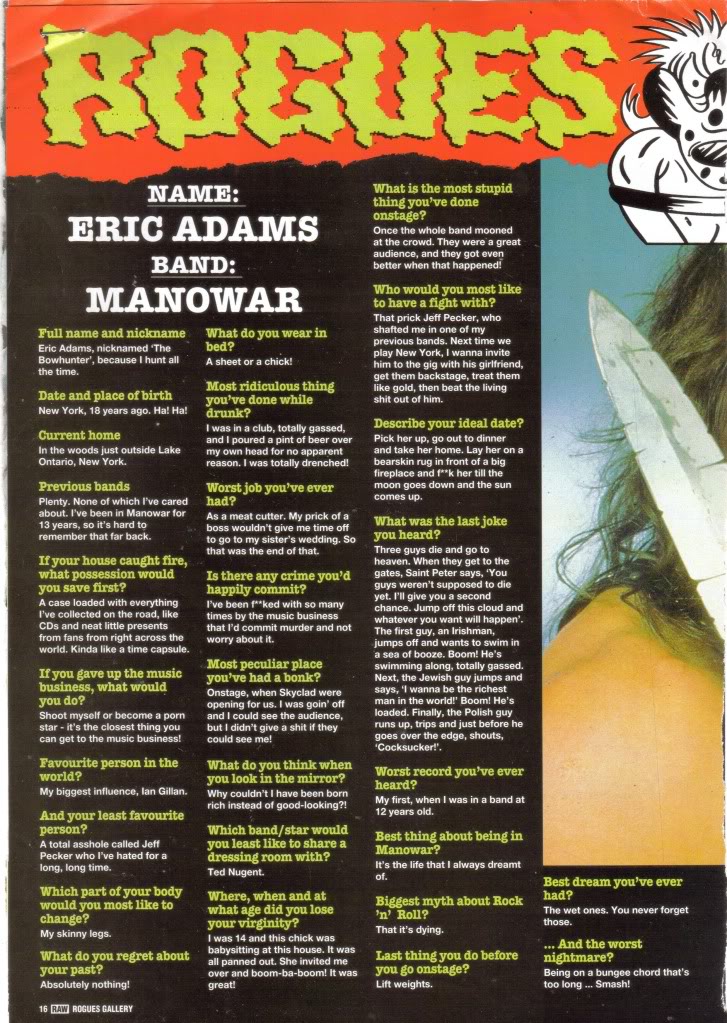 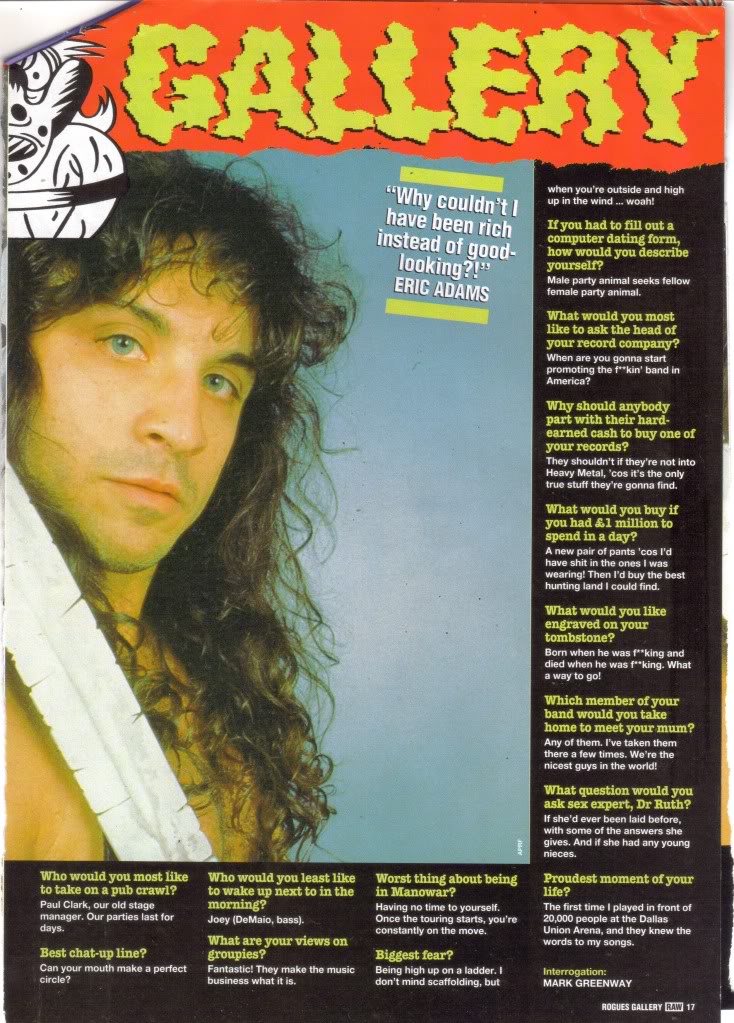